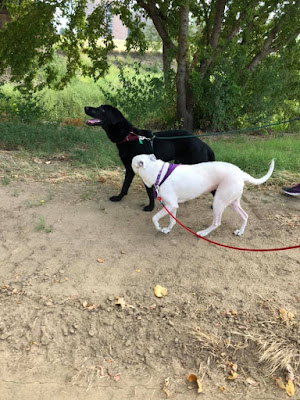 When you already have a dog and you’re bringing a new dog home, you want to make sure the introduction goes well and avoid setting up future conflict. Making some preparations before you get home and setting your dogs up for positive interactions during their first few weeks together will go a long way toward a harmonious long-term relationship.

If you are adopting a new dog from the shelter, we recommend bringing your dog with you to the shelter and introducing the dogs to see how they get along before you finalize the adoption. 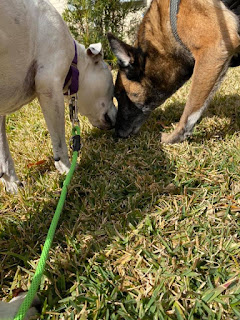 You will need one person for each dog. Introduce the dogs in an area that is unfamiliar to both dogs and preferably outside, consider a park or a neighbor’s yard if you are not introducing your current dog to your new dog in the shelter. Keep both dogs on leash during these introductions until you know that everything is going well. 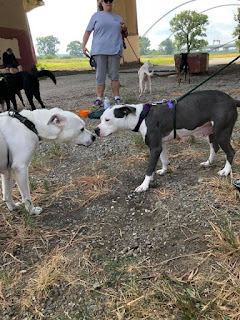 Allow each dog to sniff in the direction of the other dog and investigate if they choose. After a few seconds of investigation, call each of the dogs away and praise them. Never use a scolding or threatening tone with either dog. Also, don’t allow sniffing and investigation to last too long since we can never be 100% sure of the communication going on between the dogs and you don’t want either dog to get overwhelmed or become defensive. 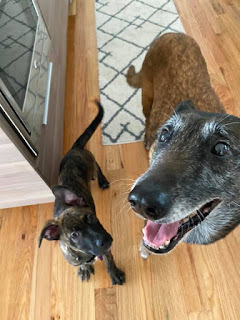 Dogs that indicate a desire to play such as play bows, and a generally loose, bouncy body language indicate things are going well. Behaviors such as the hair on their back or shoulders standing up, growling, teeth baring, rigid body tension are signs that one or both dogs is uncomfortable with the interaction. If you notice these types of communications, interrupt both dogs and call them away. Provide lots of positive interactions with each dog in a calm way such as petting, praising and even treats. When attempting to reintroduce the dogs again, do so a bit further away and for a shorter period of time. If your dog is unable or unwilling to take treats from you after being called away from the other dog, this is a sign that your dog is over excited or overly nervous. If attempts to calm your dog down do not work, try the introduction on another day. 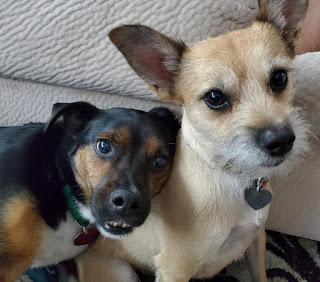 If you need to take both dogs home in the same car, consider keeping one or both dogs in separate kennels or use seat belts so that the dogs are not able to interact with each other in the car. You might also consider taking each dog home in separate vehicles. Once you have arrived home, take things slowly with the new dog. Take your new dog around your home without the presence of the other dog and introduce him to the parts of your home that he will be using. After your dog has had some time to explore, introduce the dogs again on a neutral outdoor space if possible and then again inside of their shared outdoor space, such as your fenced yard. If you have multiple dogs, introduce them one at a time at first to your new dog.

If you are introducing a puppy to an adult dog, do not leave your puppy unattended. Puppies under the age of 4 months are not usually able to pick up on another dogs subtle communication that they no longer want to interact such as their attempts to move away or growls. If you notice that your older dog is becoming uninterested in the puppy, move your puppy away and allow your older dog to have a separate space, such as a separate room in the house or behind a baby gate. Some well socialized adult dogs with good temperaments may give your puppy a warning growl, this is completely normal and should be allowed. If your puppy is not able to understand that this a
communication that your older dog needs some space, it is up to you to step in and provide your older dog some space so that it does not escalate to snapping or biting.

Be sure to provide each dog with their own set of belongings including beds, toys, chew bones, and food bowls. Each of the beds, toys, and chew bones may be shared among the other household dogs but you must make sure that everyone has equal access to a like item. Do not expect your new dog to only play with your current dogs old toys and rest on old beds, instead purchase new beds and toys so that your dogs can decide which ones they would like to claim and so your current dog doesn’t feel like his own things are being taken over.

When to Get Help

If the introductions are not going smoothly, contact a skilled behavior specialist as soon as possible. Conflicts between dogs in the home don’t usually work themselves out and punishments can make the problem worse. Furthermore, dogs can become severely injured in fights and the issue usually becomes harder to resolve the longer the issue goes on.