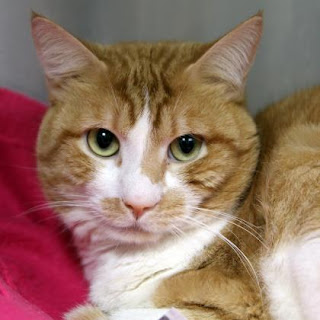 Each week, we’ll bring you an adoptable pet that has been with us for quite some time. This week, we want you to meet Fuseli!

This cat is the cattiest of cats that ever catted! Fuseli likes things the way he likes them, thank you very much. This white and orange tabby cat came to us as a transfer from another organization.

He was quite fearful and untrusting of humans at first, but has come a long way since! We were scratching our heads trying to figure out the way to this cat’s heart, until we realized what a big fan he is of being brushed! He absolutely adores being brushed, especially with a toothbrush he can rub his face on. Through lots of TLC and brushing time, Fuseli has now warmed up to humans enough to start playing! He like to chase and pounce on wand toys and is now seeking attention from people.

Fuseli would love a quiet, laid-back home where he can be the king of the castle. He doesn’t enjoy being picked up or fussed with, so if you’re just looking for a companion to greet you with an excited meow when you come home from work, Fuseli is the cat for you. He’s most comfortable when he’s the boss, so he’d prefer to be the only pet in the home!