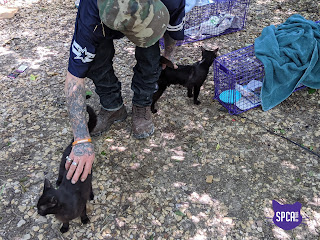 This summer, SPCA of Texas staff and volunteers learned of a homeless camp in Dallas that had an abundance of cats living in the area. A local nonprofit provides supplies and meals monthly to the people living in the camp, while the SPCA of Texas began assisting with providing food and sterilization services through our Community Cat program. 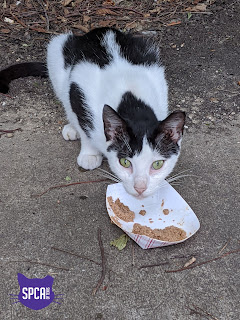 One of the camp’s residents cared for most of the cats, spending all his time and what little resources he had bottle feeding the numerous litters of kittens born to the community cats. He and the other residents cared deeply about these cats and were doing the best they could to care for them, especially the kittens that ended up abandoned by their mothers. Despite their best efforts, many of the kittens they attempted to save did not survive, and fights frequently broke out amongst the free-roaming cats. 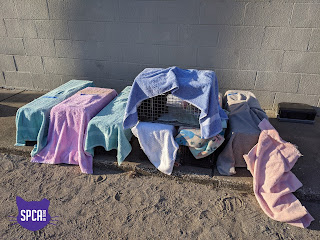 To help alleviate the burden on the homeless camp residents, the SPCA of Texas’s Community Cat program volunteers and staff made it their mission this summer to trap as many cats as possible. Once trapped, our team could transport the cats to our clinics for spay or neuter surgery, which would prevent future litters from overtaking the camp. Our staff and volunteers were able to trap more than 25 cats, who were then spayed or neutered and vaccinated against rabies. 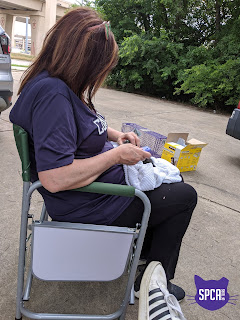 We are thrilled to report that, since the project began at the start of the summer, there have been no new reports of kittens being born in the area. Over the course of the summer, we were also able to remove over 15 kittens under 8 weeks old who were fostered and then adopted into loving homes. The course of their lives changed drastically and that is the goal of our Community Cat program. We visited the residents again a few weeks ago and the caretakers were so happy to report that all the cats seem so much happier, with the fighting totally eliminated. 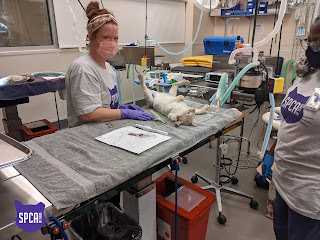 The SPCA of Texas is proud to be able to help both people and pets in our community. Providing free spay/neuter services for free-roaming cats keeps both humans and local animals safer and healthier. To support our efforts to keep our streets litter free, please consider sponsoring a spay/neuter surgery for a community cat at spca.org/giveforcats.