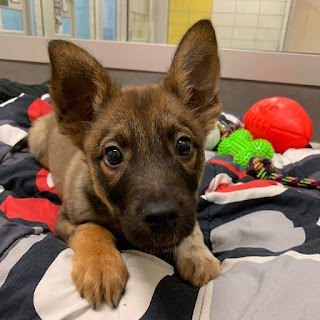 Puppies come into our homes with a lot to learn. They get started on learning their adult manners from their mother, litter mates, and the people around them before they get to us, but we have to take it from there. You will need to teach your puppy where and when it is appropriate to use their teeth and you must also teach them that it is never okay to put teeth on people or skin. It is helpful to be consistent from the first day you bring your dog home so that they don’t become confused later on.

During “play fights” with their litter mates, puppies begin to develop their hunting and defense skills, including chasing, pouncing, and nipping. They also learn how to mind their manners with other dogs. If one puppy bites another one hard enough to hurt, the other puppy will try to move away. Fortunately, for a litter of puppies, there are other siblings to pester. Finally, if the puppy gets fed up enough with unrelenting biting it will squeal and stop playing with that puppy briefly, sending a message to back off. With this feedback, puppies learn to control their bite pressure and to keep from getting too rough during play. These are important skills for your dog, since a dog that plays too rough is not welcomed by other dogs – or their owners.

Your puppy should learn early, though, that even playful nipping is a no-no when it comes to interacting with humans. The same thing goes for other rough play behavior like jumping up, charging, or bumping: those may be okay for play with other dogs, but not for play with humans. And it’s up to you as the owner to teach your pup how to interact appropriately with people.

When you play with your pup, be sure to have several acceptable chew toys readily at hand. Anytime during the play session, if your dog’s teeth touch your hands or any other part of you, stop and redirect the puppy’s teeth onto an acceptable chew toy. Repeat the procedure if the dog

starts nipping you again. If the puppy repeatedly puts teeth on skin you’ll need to take a time-out from the game. Fold your arms and turn your head away to give a “game’s over” signal to the dog. Don’t push your puppy away with your hands or scold them, as this can seem like part of the game to the dog and encourage further nipping. If they continue to pounce and nip, stand and walk away. Give your dog a minute or two to realize they’ve lost a playmate, and ignore the dog’s efforts to re-engage you. Don’t return to the game until the dog has been calm and quiet for 10 to 15 seconds.

It may help to tether the dog to a piece of furniture using a leash and harness while you’re playing with them. That way, if they get too rambunctious or mouthy, you can easily turn away and move out of range until they settle down. Alternatively, you can put the puppy in its kennel for a calm down period much like an overtired infant or toddler is placed in a playpen for a nap. Don’t worry that you’re penalizing your dog for touching you with their teeth “by accident.” Your pup can learn to be aware of and control what they’re doing with their mouth and teeth, even in the excitement of play.

Avoid ever playing with your dog using your hands especially if your puppy is prone to using their teeth on your skin and has not yet learned the boundaries. It might be cute to cuddle and have a tiny puppy chew on your fingertips but this only leads to dogs that become confused when, later in life, you no longer allow them to do such things. Discourage family and friends from allowing your puppy to chew on hands, feet, clothing, etc. It is usually helpful to provide anyone that is playing with your new puppy several toys to engage in play with so that your puppy is set up for success with many different types of situations with all types of people he meets.

Children under the age of 10 years old should not be practicing any type of behavior modification or training with your dog without an adult’s direct supervision. Often, a child’s first response to being nipped or mouthed by a puppy is to push the puppy away. Unfortunately, this could send the wrong signal to your dog meaning to him that the child would like to engage in play. Without an adult to intervene immediately the puppy could learn the wrong way to interact with children and the child could get hurt.