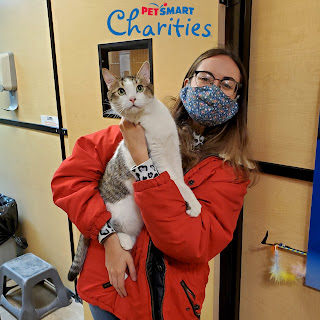 The SPCA of Texas has received a $50,000 grant from PetSmart Charities to support the organization’s adoptions of cats and kittens at North Texas PetSmart® stores.

The SPCA of Texas’ Community Cat program, alongside the Medical and Foster program, will partner in this endeavor to turn kittens born on the streets into highly adoptable kittens with futures in their new homes. With the increased intake, this grant will allow the SPCA of Texas to foster more animals, recruit and train adoption volunteers and quickly move the felines through the system to adoptions and new homes.

“We have been proud partners with PetSmart stores for many years, and have been able to find homes for thousands of cats and kittens through this partnership,” said Karen Froehlich, President/CEO for the SPCA of Texas. “The grant we received from PetSmart Charities is allowing us to continue bringing in cats and kittens off of the streets and placing them into loving homes where they belong.”

“The pandemic has placed increased strain on many animal shelters, and the SPCA of Texas has continued to serve as a vital resource for both homeless felines and the community,” said Heidi Fulcher, associate relationship manager at PetSmart Charities. “We’re proud to support this collaborative work, which continues to give North Texas homeless cats and kittens the best chance at finding homes.”

Since the beginning of 2020, the SPCA of Texas has assisted over 1,300 families with needs for their pet, including providing pet food, medical care, pet supplies and other financial support.

Since 1994, through its partnership with nearly 4,000 humane societies, SPCAs and pet rescues across North America, PetSmart Charities has helped more than 9.5 million pets to find loving homes via its in-store adoption program in over 1,650 PetSmart® stores. The leading funder of animal welfare has also donated nearly $430 million to improve access to veterinary care, to positively impact communities, to connect people and pets and to help preserve families through initiatives like this with the SPCA of Texas.