Once homeless, Dallas couple reunites with beloved cat thanks to help from nonprofits

When Deborah and Jonathan Vaughn stepped off a Greyhound bus in October seeking a fresh start closer to family, they had a tough time finding shelter with their beloved cat.

Like many pet owners, the Vaughns consider their tuxedo-colored domestic shorthair a family member.

Before arriving in Dallas, the Louisiana natives spent three years in Wyoming, where they came across a kitten so tiny that he fit in the palm of Jonathan’s hand. The couple’s constant companion ever since, the cat also provides emotional support for Jonathan, a 47-year-old veteran who has grappled with post-traumatic stress disorder and struggled with addiction.

So, when forced to eventually choose between a roof over their heads or care for Wubdabewy — think “rub the belly” in baby talk — they pitched a tent and slept on the streets.

>Everything changed when the trio met Downtown Dallas Inc.’s Samantha Moran, whose special outreach team uses a “relate and refer” approach to connecting essential services to the individual needs of the city’s most vulnerable.

Standing outside The Bridge Homeless Recovery Center, Jonathan watched Moran interact with a fellow veteran and saw a “heartwarming, welcoming” person he felt they could trust.

When Moran spotted a cat carrier as the couple approached, she knew she would need to start thinking about alternative ways to help.

“They were willing and wanting to do anything and everything to get off the streets. It was just the barrier of their cat,” said Moran, who is the assistant manager for homeless outreach for Downtown Dallas Inc.

With most shelters enforcing a no-pet policy, finding creative solutions for people experiencing homelessness can be the difference between someone getting back on their feet or a life on the streets. Downtown Dallas Inc. aims to bypass that decision by partnering with animal welfare agencies like the SPCA of Texas to provide situational fostering.

“Keeping pets in homes with the people they love is one of our pillars,” said Maura Davies, vice president of marketing and communications for the SPCA of Texas. “So, when Samantha mentioned, ‘There’s a family with a cat,’ several of us said, ‘Say no more,’ before she could finish her sentence. A bunch of folks here at the SPCA of Texas went to work.”

While the Vaughns were referred to the Dallas Life homeless recovery program, Wubdabewy took a ride to the SPCA of Texas, where he received a wellness exam, updated shots and microchipping to make him easier to find if he got lost.

For Jonathan and Deborah, parting ways with their pet — even temporarily — brought mixed emotions, yet knowing Wubdabewy was safe would allow them to start focusing on their future.

“We would have stayed on the street if we could not have found a home for him,” said Jonathan, who served three years as an Army track vehicle mechanic during Operation Enduring Freedom.

While Wubdabewy’s local foster family sent photos and updates of their furry charge, the Vaughns embraced their time at Dallas Life, taking advantage of the classes, training, counseling and housing resources specifically designed for veterans.

Just before Thanksgiving, the Vaughns settled into a new apartment, where they were joyfully reunited with Wubdabewy, who quickly began to explore his new digs.

Deborah bubbles over with enthusiasm talking about “all the angels” the couple have encountered in Dallas and her relief that Wubdabewy can be free of his carrier and leash.

“This is a sense of safety that we haven’t felt in a long time — Wubdabewy and us,” said Deborah, 41.

The Vaughns hope their story will inspire others who are willing to “put in the work” to seek the life-changing help they need. Jonathan said he doesn’t like to think about what might have happened if they hadn’t connected with Moran. He’s just glad they did.

“God bless everyone who has made this possible,” Jonathan said. “This is going to be home.” 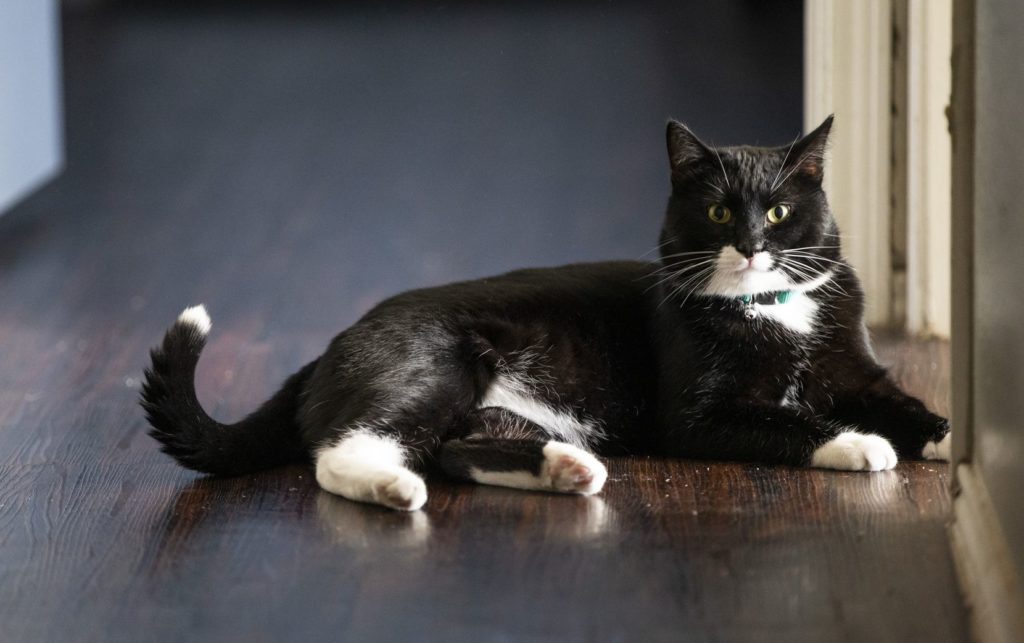 Wubdabewy was reunited with his owners thanks to the help of several groups, including the SPCA of Texas, Downtown Dallas Inc. and the Dallas Life homeless recovery program,(Brandon Wade / Special Contributor)