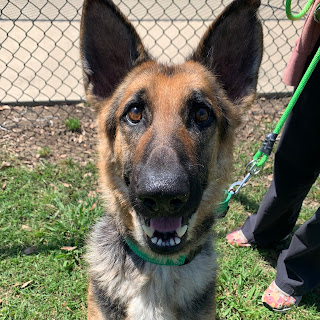 This week we want to give you a closer look at Kody, courtesy of our friends at ReadingGlasses.com!

Clearly, this long-term resident hasn’t found their forever home yet because the right person just hasn’t laid eyes on them yet! Keep reading for more details about this super smart pup!

Work hard, play hard – that’s Kody’s motto! This rambunctious pup is sharp as a whip and is over the moon when he gets to learn a new skill. He works super hard to understand what’s being asked of him, and once he’s got it down, he’s ready to romp and play! This big, energetic boy is hoping for a home with a German Shepherd lover – someone who is used to gigantic goofballs who sometimes can’t contain their enthusiasm! Because Kody is so smart, he’ll need plenty of enrichment and engage in fun activities with his owner. 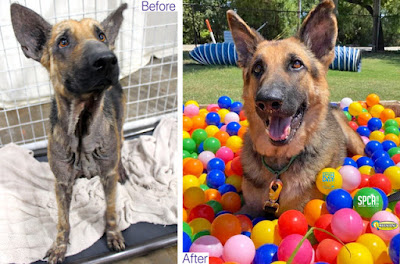 While Kody’s fan base is mostly made up of female staff at the SPCA of Texas (who are on track to spoil him to pieces), he’s actually a bit of a daddy’s boy! Yep, this big guy attaches to males much quicker than females and likes to have a male human figure to look up to and take direction from. Kody would love a home where at least one male would be invested in his training and development.

Looking at Kody, you’d never know that this gorgeous guy used to look completely different! Kody came to us underweight and with several skin issues that took several months to resolve. Once skinny and nearly bald, Kody is now filled out and flaunts his luxurious, fluffy coat everywhere he goes.

Kody is neutered and up-to-date on all vaccinations. To make an appointment to meet Kody, please visit spca.org/adopt.