It’s hard to say why some dogs fly out of the shelter doors into the arms of new families, while others are still waiting after months or years. It could be they’re not puppies, their fur is too long, or they’re too shy to grab an adopter’s attention right off the bat. And yet they have so much love to give!

“Adopt a Less Adoptable Pet Week” is Sept. 18-24 and in celebration we’re highlighting some of our longest-term shelter dogs. Please take a look at these precious pups and share with a friend or family member today.

Here are just a few of the longer-term residents currently with the SPCA of Texas: 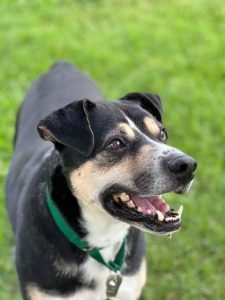 Christopher Robin is a Shepherd mix with the most adorable little lopsided snout and great big, soulful eyes. He is a large dog at 77 pounds, and is covered with luxurious black, tan and white fur. He was brought in as part of an animal cruelty seizure on Sept. 18, 2019, and has been in the care of the SPCA of Texas for more than three years.

Christopher Robin was pretty scared when he first arrived at the Russell E. Dealey Animal Rescue Center. The behavior team worked with him patiently, and his outlook has changed tremendously! Christopher Robin is an extremely intelligent and loyal dog and would be especially well-suited for someone who is active outdoors when they’re not snuggling with him on the couch. He has been waiting so long for his forever family, but we know that he is eager to be somebody’s chill sweetheart. Will that be you? 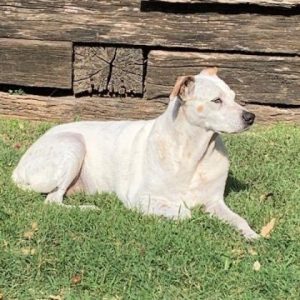 Gucci is a mixed breed dog who just barely falls in the large category at 47 pounds. Her gorgeous blue eyes appear to be lined with the finest makeup, but that’s just her natural beauty! She has white fur with some shaded spots and light brown fur on her ears, too. Overall, quite the beauty, inside and out! Gucci came to the SPCA of Texas on Oct. 10, 2019, also as a seizure in a hoarding case. She is a very laid-back dog who hardly ever barks.

She loves to lounge around on a couch or doggie bed. Gucci was so very shy when she first came in but has been in foster care and has made major improvements since the early days. Now when her favorite humans arrive, they are greeted by an enthusiastically wagging tail, and bright eyes ready for love. Her foster describes her as “low maintenance” and adds that she is a very sweet dog. She doesn’t much like to go for walks on a leash, but she is completely house trained and is usually up for roaming about in a securely fenced backyard. 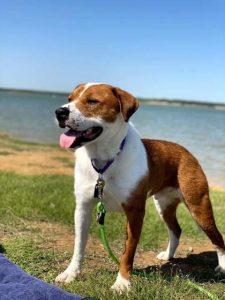 Rhino is a mixed breed dog who weighs 51 pounds. His huge brown eyes will capture your attention immediately, and you’ll be charmed by his floppy ears and sweet swagger. He was seized by the Animal Cruelty Investigations Unit from a Dallas yard on Nov. 15, 2019, and has been in the care of the SPCA of Texas ever since.

Rhino was really rough shape when he came in, with almost no hair and he was extremely underweight. Focusing first on his health, the medical team went to work and got him back in shape. Rhino is currently in foster care, and his caretaker says he is loving and playful like a human kiddo. He does zoomies around the yard and seems to be making up for his lost puppy years with his exuberance. He is also a very smart dog and has learned more than five tricks so far. He’d love to find a family with a securely fenced backyard so he could continue to indulge in his energetic ways.

Those are just three of the incredible pups who have been in the shelter for an extended period. These dogs, and many more like them, are ready to make amazing additions to some human families in North Texas. Bringing a dog into your home is one of the best, fastest ways to improve yours—and their—quality of life. And with the SPCA of Texas it is a very simple process to adopt your new best friend and cruise off to your happily ever after!.

To browse all the dogs available at the SPCA of Texas, go to SPCA.org/dogs.