For more than 30 years, NorthPark Center has supported SPCA of Texas during the holiday season by welcoming the Home for the Holidays Adoption Pavilion. This portion of the event runs from the day after Thanksgiving through the day before Christmas Eve. Over the years, thousands of pets have found their forever homes thanks to NorthPark Center’s partnership. What’s more, for the last eight years, generous members of AIA Dallas and TEXO, the Construction Association have paired up to design and build innovative dog houses and cat condos for the Bark + Build design competition and auction portion of Home for the Holidays. The Bark + Build structures are displayed at NorthPark Center from mid-November through early-December and auctioned off to the highest bidder to benefit the SPCA of Texas. They are also voted on by a renowned panel of judges to receive awards.

“This, our eighth annual competition’s silent auction, brought in the highest donation SPCA of Texas has received,” said Special Events Manager Jan Scoggins. “The contribution amount has steadily increased every year, and the 2022 Bark + Build auction resulted in $25,000. All told, with our generous sponsors’ support, the Home for the Holidays event has raised more than $62,000 for the animals. We are so thankful to every person that took time and used their creative minds to build these fabulous structures that not only will be used by our furry friends, but also are great conversation pieces in and outside of owners’ homes.”

There were 22 pet homes entered in the competition, all of which drew oohs and ahhs from the thousands of shoppers enjoying the holiday season at NorthPark Center.

“Bark & Build brings architects and builders together for a common cause,” said Chair Sara Barber, general contractor with The Christman Company. “Not only is this a great opportunity for us to raise funds for the animals we all love, but it also is a chance for us to collaborate in fellowship.” 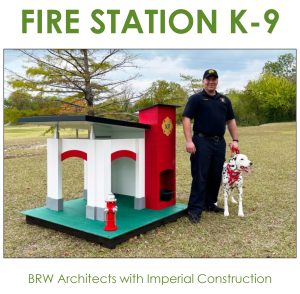 The Best In Show Award went to “Fire Station K-9,” a creation of BRW Architects and Imperial Construction. 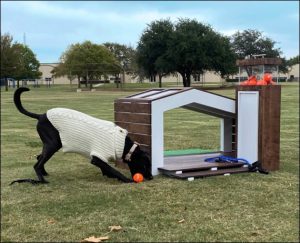 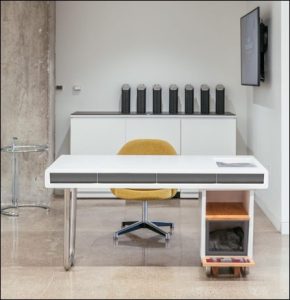 Furr-niture:
“WOOF” From Home by OMNIPLAN
with VCC Construction 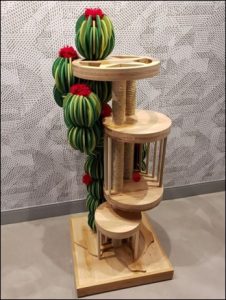 Cat Condo:
Deep in the Heart of Texas by LEO A DALY
with Holt Construction 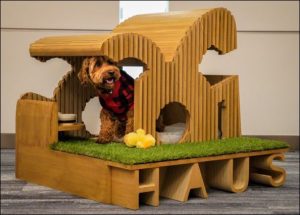 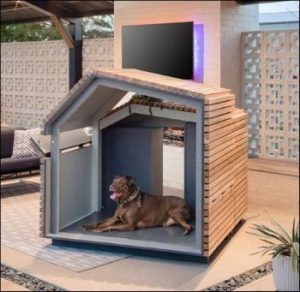 Big Dog:
Barkkula by EYP
with The Christman Company 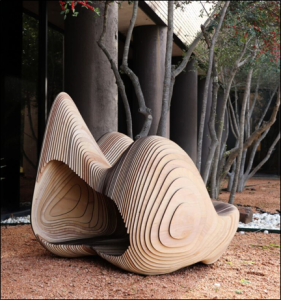 Hot Dog (Overall Runner-Up):
The Cave by Perkins & Will
with Skiles Group

This year’s panel of judges included two architects, two contractors, one board member, one veterinarian, and one member of the local media.

To determine this year’s award recipients, judges spent one morning studying the pieces, going over structural elements, design, aesthetics and usability. VCA Animal Hospital Veterinarian Dr. Troy Cobb said he’s been doing this for years and doesn’t think twice about saying yes when he gets the call to volunteer as a judge. “My primary objective is to make sure the houses are safe, and that a cat or dog might really use them,” he said. “It’s also really different for me—lots of fun and very artistic.

“I’ll keep judging as long as they keep calling,” he smiled.

Whitney Stewart Pastore, head of business development for Sebastian Construction Group, has volunteered with SPCA of Texas in the past. “This is my third time judging, and I’m looking for something that is not typical,” she said. “As I look at the structures I always ask, ‘Would my client want this in their home?’”

“I moved several things around on my calendar to be here,” said Andy Kelley, senior project manager with Talley Riggins Construction Group. “I’m a friend of Sara’s, but I love animals and I watch SPCA of Texas on Facebook and I support your cause.

“It’s also pretty awesome the way this brings several different industries together for a common cause,” he added.

“Just a reminder that if you are looking for a new furry family member, this is also our 32nd year of the Home for the Holidays event at NorthPark Center, and you can still go check out and take home a new best friend until December 23. We’re there seven days a week from noon to 6 p.m.”